Strava Challenge - Children in Need is children indeed for Exception

Question: What do a children’s charity and a tech company with a passion for sport and fundraising have in common? The answer? All have the right ingredients for a sizzling Strava Challenge.

Exception has raised over £1000 for Children in Need by travelling the equivalent miles, virtual and local, from Edinburgh to Bristol (our offices) six times in just nine weeks.

That’s Edinburgh to Bristol and back. Three times!

Our “sporting” endeavor was inspired by the current challenging times. The number of UK children in poverty is projected to rise to 5.2 million by the end of 2022, reveals State of Child Health.

The cost-of-living crisis has already forced thousands of families into poverty this year. Exception has been a committed supporter of Children in Need for several years and, as we mark our 20th anniversary in 2022, we decided to do something completely different. It all forms part of our commitment to delivering social value. 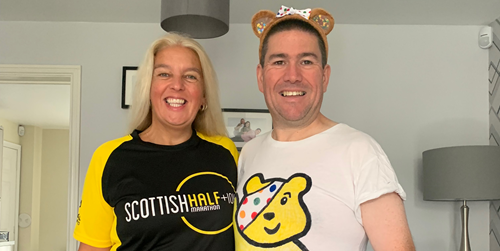 A fantastic fundraising idea was formed

First up was creating a club on the Strava Sports App where everyone could log their weekly sporting achievements. This included cycling, walking, swimming and running.

Remember, we could cover as many miles as possible by any means –yes even Paddle Boarding was an option – although there was less enthusiasm for this in Bristol’s chilly and Edinburgh’s even chillier waters!

Nevertheless, a committed group known as the “Exceptioneers” signed up, recording their efforts on a leaderboard updated weekly to promote some “healthy” competition.

So, mission accepted and accomplished! A big shout out to Neil Campbell (Pudsey ears pictured), Ruth Sadler, Michael Buchan, Stephanie Tyas, Graham Adamson, Alison Marwick and Andy Moore. And to all other colleagues who took part and/or donated.

Ultimately, we clocked up an impressive 2250 miles for Children in Need over nine weeks, raising £1000, with the company itself making a generous donation.

Back to all insights

Our year of successes